By Unknown January 29, 2006
Marshall and I decided to go ski on Hyalite peak yesterday. It wasn't particularly early, around 9 am but it was early for us. We anticipated skiing out in the dark and were well prepared for the adventure. The road was in pretty good shape but there was a kind of giant five foot spaced snowmobile washboard that made it a slow drive. Two hours later we had parked the car off the road by backing over some two by ten boards laid out over the soft snow. Boards like those are a key tool to have when venturing up Hyalite road in the winter. We also had 3 good shovels, two tow straps and four tire chains. We were prepared. 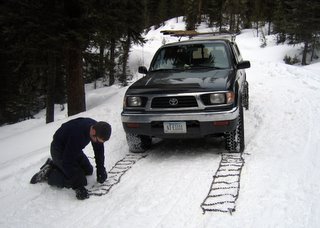 We started skinning (skiing uphill with tracion "skins" stuck to skis) up Hyalite lake trail. It was 5.5 miles to the lake but we figured we could still get a run or so in before it got dark. Three hours later we were still skinning. The giant snowmobile washboard covered the trail so we were skinning up and over two foot high mounds the entire time. We got to the base of what we were going to ski and went up. We got to a nice starting point and began preparing for our descent. It was a bout 4:30 so we wanted to get as far out as we could before it got dark. The skiing was really good; the snow was nice and the terrain was really fun. Kujo got sprayed with some snow and we jumped
off some small cliffs. 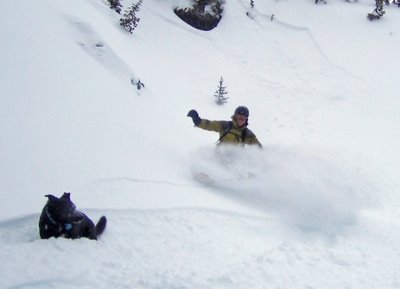 Then the fun started. The trail was not steep enough to ride out all the way on, so we ended up doing a combination of x/c skating and out of control flying over the previously mentioned bumps and arrived back at the car at 7 pm. Then we got stuck a couple of times. We eventually took off the chains that had been digging holes and lowered the tire pressure to 15psi on all four tires and motored right out of the hole we had previously dug. It was 9pm and we hoped our troubles were over. 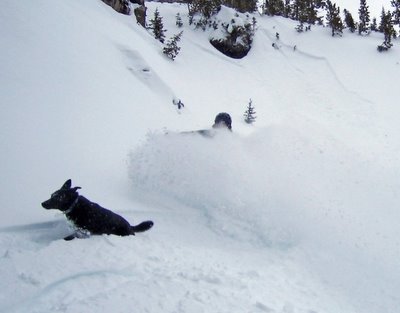 Then we came across some ice fisherman in a bit of a predicament. Hyalite road is plenty wide for two cars to pass but the snow on the edges is much softer than in the middle so passing often results in getting stuck. These guys were really stuck trying to pass an abandoned buried subaru on a hill. We did a lot of digging, pushing and pulling and they finally gave up at around 11:30 pm. We got them to back down the road and turn around. They were very grateful and geve us some pints of old Mill. It was then smooth sailing, or rather obnoxious bouncing on washboard all the way to the mouth of the canyon. We made it back into Bozeman at around midnight. We had done about 5 hours of digging and pushing, destroyed both 2 by 10 boards and used every tool and technique we knew. 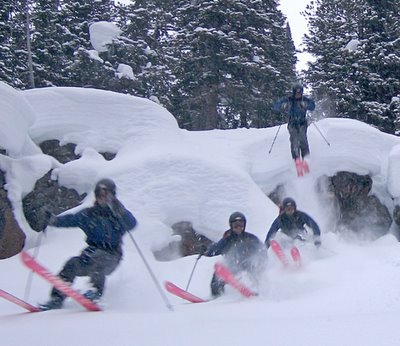 We returned a panicked phone call from our worried friends and found out that the sheriff had actually heard that our car was stuck up Hyalite. Our friends had actually started up the road to Hyalite to look for us and at the last minute got another report from the sheriff that we were ok. It is nice to have people willing to do that for you, and we were certainly grateful.

So all in all it was around 14 hours of effort for one ski run. It was a really good run, but I'm not sure it was worth 13 hours of constant effort. We were once again reminded that going up Hyalite road in the winter is never as easy as it sounds. It think in the back of our minds we knew exactly how the trip was going to go the whole time though.

Anonymous said…
I just added your blog site to my blogroll, I pray you would give some thought to doing the same.
12:33 PM, January 14, 2011