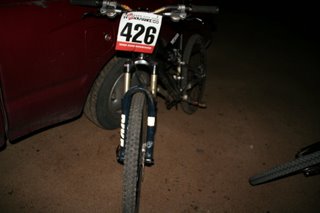 Stage 1: The race started in the dark at 6am at The Canyons resort. The course climbed for about an hour to a trail that traversed up the valley towards Deer Valley Resort. About an hour into it I ran over some fresh dog sh!t and splattered it all over my water bottle, which was mounted on the bottom tube of my bike. After getting it all over my hands (fortunately it wasn't on the spout) I lost the bottle in another 20 minutes anyways. The rest of the stage was pretty uneventful, although heard later there was a bad accident somewhere behind me of some kind I. It wasn't anyone I know, and I think they are going to be OK.

Stage 2: They didn't have any replacement bottles I could have at the aid station so I just drank a bunch of water and took off with the 1 bottle I had. It was still pretty cold out at eight in the morning so I wasn't in that much need of water anyways. The second stage started with a long and hard climb on steep dirt road and rooty, twisty trail up about 2,000' or so. There was another water stop before the top and I had a couple more glasses of HEED (like gatorade). It was about then that my front brake hose bolt came loose at the caliper and brake fluid oozed all over my front brake pads and rotor. I noticed this quickly but it was too late to save the brakes. I did the descent easily with just a rear brake as it wasn't that steep, but I was definitely lacking that instant stopping power I had previously enjoyed. 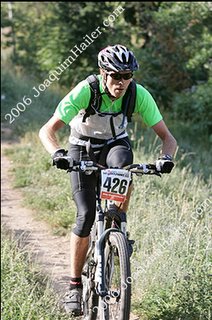 Stage 3: The third stage started with a long, switchbacking downhill. I put my camelback on for this one and didn't have any more hydration problems. There were a lot of switchbacks on the initial downhill and without front brakes I had no choice but to attempt some of them at a speed. It ended up working out just fine. The rain that had fallen in stage 2 made the trails really grippy on the corners. This stage was a bunch of lower elevation up and down climbs in some smaller hills just above park city. I got lost in suburbia for about 15 minutes but realized my mistake before it got too bad. The stage ended with a long, miserable climb back up to the resorts in the mountains. It started raining and got pretty cold during this climb, but I was working hard enough I managed to stay warm. I passed three or four other people who were having a tougher time on this stage on some steep hills before the finish. Towards the end my front brake started coming back a little bit too as the remaining fluid in the system settled down from the reservoir at the lever into the hose. Things were looking up.

The fourth stage started with getting hailed on in 30mph winds on the side of the ski area while still climbing. The climbing eventually stopped and the sun came out towards the top. The descent was on really fun trail, almost fun enough to make me forget about how I'd been riding for almost 10 hours and 70 some miles. It was a long descent, this stage was essentially the reverse of stage 2, which had the horrible climb previously mentioned. This descent ended up with me getting stuck behind some racer guy who wouldn't let me by. Towards the bottom he kicked up a big rock while I was right behind him and I flatted my rear tire on it. I fixed the flat but got passed by a couple more people while doing it.

The fifth stage was the easiest. It started with a big climb. I passed most of the people who passed me while I was flatted, including the guy who kicked up the rock. I climbed back up the the trail that I had traversed on during the 1st stage and cruised back over. Before I knew it I was back at the Canyons where the whole thing started 12 hours ago. (OK, "before I knew it" was a bit of an exaggeration)

Anonymous said…
You make it sound so easy. I am still at the beginner/intermediate level, so I don't think my ass could take a 100 mile track. Shit I road 30 miles on a flat road the other day and it killed me. Awesome post though. It sounds like something I would love to be able to achieve some time in the future.
7:37 AM, August 29, 2006

Anonymous said…
You are the man, the things you and Jesse do are awesome. They add a lot of spice to the life of the "old timer" ZZZZZZZZZZZZZZZ
11:47 AM, August 29, 2006

Anonymous said…
I think that if you had knee warmers that matched your jersey--green ones-- that would be very pro. Also, green oakley racing jackets would tie it all up. Nice ride JP, I am quite impressed.
9:55 AM, August 30, 2006

Unknown said…
If i can find a stockpile of other Perforamance Bikes clothing from 1995 maybe. . .

Anonymous said…
"Can you rewrite the article on this 1 and compare it to the main supply? Awesome way of pondering about it, but maybe I do not believe of it that way."