One of the coolest things about the woods here: 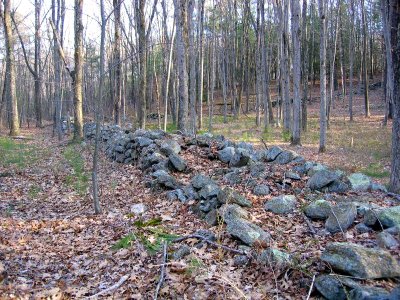 The type of rocks that masons used to build stone walls in New England varied. Most of the time the rocks that were used in a wall were granite, limestone or gneiss. These rocks were the most popular to use because they were found in abundance across New England. These are also the few types of rocks found in New England. When a mason or a farmer requested rocks, they usually had to be drilled or mined out of caves. A substantial amount of rocks used in stone walls were also those found in farms and in woods. 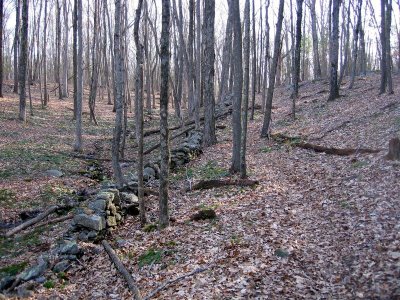 The reason why so many stones were found throughout farms and woods is because of glaciers. When the glaciers were formed, they trapped many rocks within them. When the glaciers melted across New England, they would dump millions of tons of rocks in random places such as woods or land that would be used as farm later on. The only types of rocks that could survive a glacier are the really hard ones, such as granite and gneiss.Glaciers also left many fieldstones and other rocks rather smooth because a glacier would tumble and tend to smooth out many rocks. Because of the round shape of these rocks, they were not very useful in building walls. The rocks that were not rounded however, were very hard and durable once put in a wall. 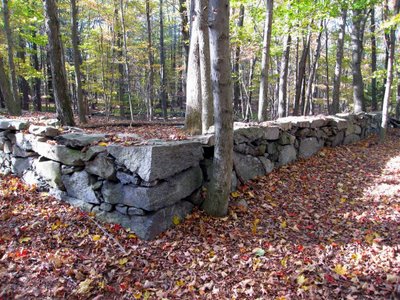 No, this isn't my research, I read a book on stonewalls in the bookstore and decided to post this from here. The pictures are all mine though.

jesse parker said…
I chased the witch down and squirted her with my camelbak, and she melted.

Yeah, that's a fancy name for any rock left behind from a glacier. The less durable walls are made from the rounded ones, and the really nice ones from the real hard rocks that didn't get rounded tumbling in the glaciers.

Anonymous said…
I guess it's good to get all nostalgic about those rocks. All I can think of is the poor farmer who had to move all of them so he could plow.zzzzzzz
3:04 PM, October 24, 2006

jesse parker said…
Sometimes the farmers hired masons, if they wanted the job done up to code.. If it's up to code, they aren't liable for other peoples animals eating their stuff..
3:04 PM, October 24, 2006