Skip to main content
By Unknown June 27, 2007
I almost forgot to post this. . .
After climbing Mount Rainier we had the great idea that we were going to drive all the way back to Missoula. Part of the reasoning was that our sleeping bags were packed in our backpacks which were packed behind everything else in the full back of the pickup, and we had no interest in extracting them.

So it was midnight and we had just taken a little rest stop on the top of lookout pass 100 miles outside of Missoula. We saw a bunch of trucks and a Uhaul pulling a car go by as we were reentering the interstate. Right after the pass there was a couple-mile long section of 10% grade. One side was under construction so traffic was being routed up and down the other lane, and there was concrete Jersey Rail on either side of it. Shortly after heading down this we started to see burning debri on the road.

That's right, there was burning debri - pieces of styrofoam, slicks of oil etc. - on the road. It was on fire. Strangely, probably due to the extra long day, I didn't think too much about this. After swerving around pieces of it following the semi in front of us we came to a stop. There was a piece of burning styrofoam in the middle of our lane so we veered out into the left lane a bit to get around it. 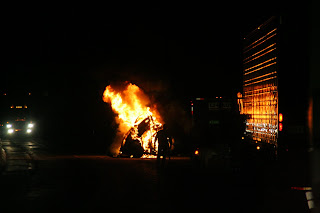 Then we saw it. There was a car in the middle of the road, wadded up in a little ball with 20 foot flames coming off of it. It looked bad, there was no way anyone who was in that car could have survived. Fortunately, as we would find out later, it was empty.

After about 45 minutes I decided to try and find out what had happened. I walked up to the group of 3 people who were closest to the blaze. There was one lady there who was a bit more upset then the rest. She said she was driving her Uhaul (the one we saw earlier) and a semi truck came blasting by her and hit the car on the dolly she was towing. The car then proceeded to fall off the dolly and begin it's way down the 10% grade on its own. At some point after ricocheting off all the gaurd rails it started on fire. It also passed the Uhaul itself, which would probably have been an unhappy moment for the lady in the drivers seat. Seeing her own car on fire with no driver passing her on the interstate bouncing off guardrails. I know I wouldn't like that.

Then it hit one of the guard rails at speed and crumpled into the ball seen in the picture and burst into flame. It burned for a solid hour while we waited. The tires were all exploding, which added some drama and suspense to the scene. The fire department from Superior showed up once the fire was mostly burned out and they finished it off. They were pretty thorough, the giant pile of hot metal took a while to cool down. Then they let us by.

We got to missoula at 3am and slept till 11am solid at Doug's house. The drive to Bozeman in the morning was much less eventful. 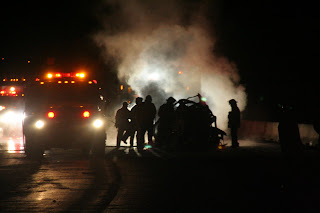 Anonymous said…
What an exciting trip that was!! It's neat that you could see this without being involved. I'll bet that woman will never forget that day. Floss
9:22 AM, June 30, 2007

Anonymous said…
We were about half a dozen cars behind this accident (if you saw a big 5th wheel RV, that was us) but didn't know what had actually happened -- we were too close to the accident to want to get out of our vehicle. I've been running periodic searches trying to find out about it, and stumbled across your blog today. Thank you for posting this, I'm tremendously relieved to find out that it was a freak accident and no one was injured.
3:27 PM, July 26, 2007