This year was harder then last. I placed better but took hours longer to finish the course.

Stage 1:
We started racing at 6 am in the dark at the bottom of Park City Mountain Resort. The first mile or so of the climb was on a steep dirt road, which was designed to string the riders out enough that it wouldn't be a big traffic jam when we hit the singletrack. It kind of worked, although I ended up behind some people who were going slower then I wanted to. The singletrack climb was pretty tricky, I gained four places as the people in front of me failed to manuever themselves up the roots and switchbacks of the climb. The climb ended with a 12 or so mile section of trail that was relatively level. I rode and chatted with 2 different people on this section. Then I got a flat on the descent down to The Canyons and fell behind a few minutes.

Stage 2:
Stage 2 started with a long climb vack up to the same relatively level section of trail then a descent back down to Park City. I picked up the pace a little bit and quickly caught up to the people I was chatting with before the flat tire. I rode with them for 30 minutes or so then passed them and took off. I passed a couple more people before the end of the stage, although most of them weren't in the 100 mile race (50 mile or 100k racers).

Stage 3:
This started with the first of four climbs up the trail called "spiro". This trail would be the source of the majority of discomfort caused by this race. I wasn't feeling too great after the previous 40 miles and 6,700' of climbing already completed. This was the hottest stage, and I slowed down a bit in the sun. I passed a couple of people on this stage that had stopped to rest because they couldn't pedal any more. This made me feel a little bit better about myself since I was feeling less bad than they appeared to be feeling. This stage was two laps on the same 10 mile section of trail. The climb up spiro was marginally better the second time, although I was a little bit slower.

Stage 4:
This was the bad one. It started the same as stage 3, but when you reached the top of the stage 3 climb you kept going up a steeper section of trail for another thousand feet of vert. I passed several more shattered looking people on the first half of it. Another rider was behind me the whole time, and I was trying pretty hard to stay in front of him. I managed to for the next 45 minutes or so of climbing, but unfortunately I didn't eat enough food in this period and started to bonk badly. I eventually had to stop riding and eat something. I quickly consumed 700 calories of sugar in the form of hammer gel. It took affect rather quickly and I sped up a little bit. The climb still went on and on, and after 3,000 feet of vertical it finally stopped. This was the start of a 14 mile descent that was fun even in the decrepit state I was in at this point.

Stage 5:
This one was the same as stage 4, on the same climb I had been doing for the last 3 stages. It was pretty hard, but knowing that it was the last time made it much better then stage 4. I had some strange wildlife encounters on the descent, including having to chase moose and deer off the trail so that I could get by. The strangest was a squirrel who hesitated a bit too long before trying to cross the trail and bounced his head off my front wheel with a nice little "ding" and scrambled back the way he came. Pretty soon I was coasting down the street to the parking lot finish and it was all over. 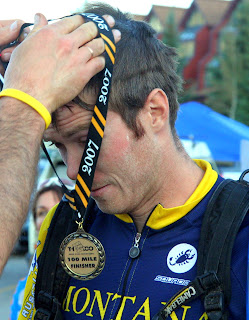 The course was different then last years, and in my opinion it was much harder. I placed 12th overall and 3rd in my age class, which was better then last year, but took 2 hours longer to finish the course. Out of over 60 entrants there were only 25 who finished the course. Lots of people had a really hard time on stage 4 and many dropped out because they didn't want (or couldn't do) the same climb again.

The GPS missed the first lap on stage 3 completely, and overestimated the elevation gain by several thousand feet. The realistic gain was somewhere over 16,000 still though, which was more then enough for me. Total length was just over 100 miles, and probaly 98% of it was on singletrack, some of which was pretty technical.

Thanks to my tireless support crew the race went really smoothly. I'll most likely be back next year after I've pushed the bad parts of the race out of my memory.

Anonymous said…
A John Parker is famous.
(finally)I have to turn it over to the head one. ZZZZZZZZZZZZ
All that effort got me off my duff and into my pool for forty minutes of sustained exercise. Floss
5:18 PM, August 28, 2007