By jesse parker January 18, 2008
I was browsing through some older photos when I came across this. I read about these but didn't realize I had a photo of one. John took this a couple of years ago. It's sort of a rare phenomenon known as a Broken Spectre. Pretty cool name if you ask me. 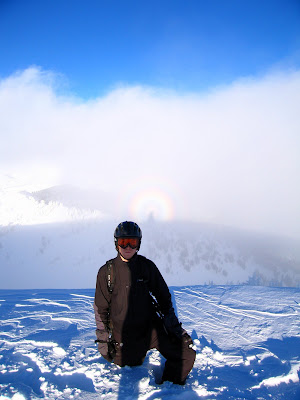 A Brocken Spectre can only be seen when specific conditions are met: The sun must be directly at one's back and there must be many suspended water droplets in the air where the Spectre's glory appears. Sunlight enters the water droplets and reflects off the back of the droplets and the light comes back towards the sun and the observer. This phenomenon is called diffraction and causes the circular rainbow-like bands around the shadow. Even if you are in a group you can only see your own shadow and glory (rainbow) ring, or your own Brocken Spectre. Therefore Brocken Spectres are confined to high-mountain areas when the sun is low.


Legend has that the name came from the Brocken, the highest peak of the Northern German Harz Mountains. Once a climber was startled by the sudden appearance in the nearby mist of a human figure with a ring of light around its head. Frightened, the climber fell to his death, killed by his own shadow that he saw and the ring of light was his own glory ring.

If only I wasn't in the way. You can still see it just over my head though. Tat's John's shadow I believe

cool helmets are good S60 spectre is a cool word

Anonymous said…
I am doing research for my college thesis, thanks for your excellent points, now I am acting on a sudden impulse.