By jesse parker March 15, 2008
So this week went by pretty quick for me. I've been quite busy at work qualifying a new machine to make a bunch of different part families of screws. We have a pretty involved process for making sure the machine can produce the parts we want. This involves getting my hands dirty with the machine as well as some stats, paperwork, programming and all sorts of other things. Out of curiosity I checked ebay to see if they had any synthes stuff. Turns out they had one of the exact part families I've been making at work with this new machine. 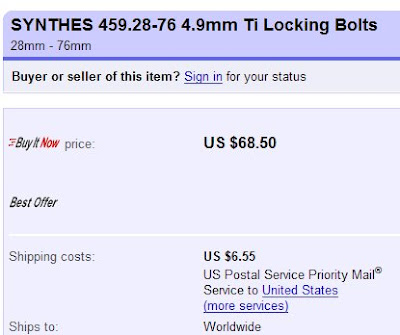 Damn, 68 bucks a screw! I probably scrapped more than my paycheck in inventory this week trying to get the process right. But I guess that's what they hire us engineer folk for right?

The beginning of the week was nice and sunny with temps in the mid 60's Tuesday and Wed. On Tuesday I went for the first after work ride of the year thanks to Daylight Savings Time. Rode at Palmer with a group of people from MTBR.com that I've ridden with before. It was quite fun, I didn't even need knee warmers..

Me, taken by Nick. Picking a "unique" line down a section they call "improv". Nick, taken by me. A fellow mechanical engineer, this guy does some pretty impressive stuff on a bike. I didn't bring a camera so I used his occasionally when he wanted to do something stupid enough for documentation.. 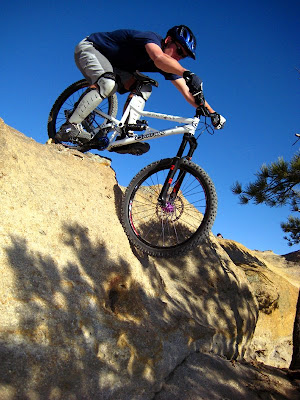 Two days after this it was snowing so damn hard I could hardly see in the morning. Most of that's gone now, but the weather looks sort of grumpy for the next few days. This weekend so far involved a trip to Colorado's largest bike sale at a place called Bicycle Village. There were at least 500 bikes probably more on sale in the parking lot. Neither Kara nor I were in the market for a bike (well, I guess I'm always in the market for a bike), but I did get a new helmet.

This morning we went to one of Kara's students baptism into the Mormon church. I'm a firm believer of gathering all the life experiences I can, and this was certainly a new one to check off the list. Say what you will, Mormons are some of the nicest people I've ever met. They only tried to "save" Kara twice in the few hours we were there. They didn't approach me though, am I unsavable?

It was fun, and people brought in tons of gifts to donate to a local hospital as part of the service component of the baptism. So that was good.

The only plans for tomorrow so far are a Guiness and some corned beef. Should be a good time.

whew, that was a long one... Now did anyone actually make through all my jibberish?
bike green palmer SD800