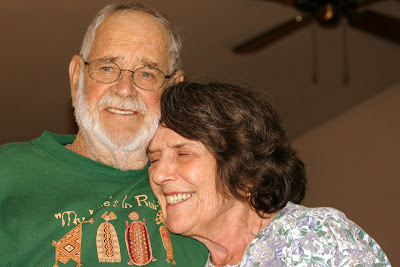 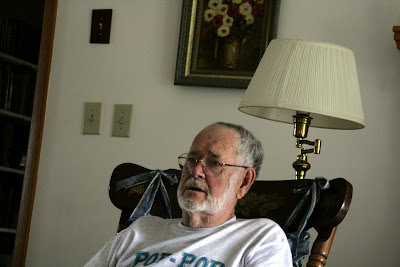 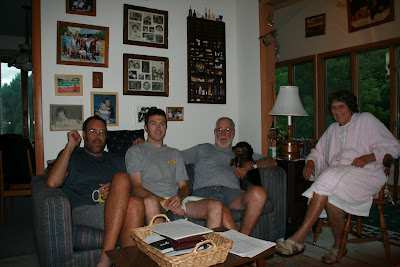 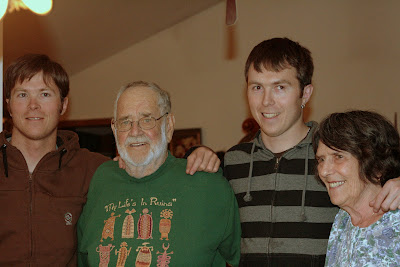 My Grandpa Zeke passed away last Wednesday, 1:45 AM.

Jack "Zeke" Parker, age 83, died peacefully, joining his 5 brothers, his parents, his best friend Ron, and many other close friends and relatives, on July 3rd, 2008 at his home in Vincentown surrounded by his family.

Zeke grew up in Burlington Township and farmed for years before serving in the Army during WWII in Belgium. He returned home and worked for The Northeastern Breeders Association. While his 5 children were growing up, he attended Trenton State College, then Glassboro State College, achieving a Masters Degree in Environmental Education. He began teaching at the Stockton School in Cherry Hill and influenced the lives of many of his students until his retirement to his beautiful 2-acre home. He enjoyed sailing, playing music, gardening, and filling his freezer and the freezers of others with his produce. From 1954 through 2008 Zeke entertained many people as a member of the in the Burnt Cork Show which financially supports the work of Deborah Hospital.

He is survived by his wife Florence, "My best one", son John and wife Mary Gum of Florence MT, daughters Susie and Robin of Long Beach Island NJ, son Tom and wife Donna of Atco NJ, and son Billy and wife Brenda from Chandler AZ. He has 7 delightful grandchildren; John from Montana, Jesse from Colorado, Emily from Arizona, Kelsey from Washington State, and Danielle, Sara, and Laura from New Jersey.

He was a dedicated educator, loving husband, parent, and grandparent, enthusiastic sailor, avid farmer, glowing entertainer, sketchy musician, and marginal carpenter. Most of all, this great man was a sincere and wonderful friend, one-of-a-kind, who changed the lives of everyone who crossed his path.

A video of a tribute played at the end of the funeral service at Zeke's request.  This was the last of four songs with the first three played by his old band and on the last, his three sons and me.  Tom on the left on the fiddle, me behind him on bass (hiding for the most part), My dad on guitar and lead vocals, and my uncle Billy on the Mandolin (he's the best mando player I've ever seen).  It was a great tribute, exactly what he would of wanted as a lifelong entertainer.

Unknown said…
Jesse,
What nice pictures of times spent with your grandfather and what a wonderful tribute to him at the end of the funeral service. I know he'll be missed by you and your whole family. May he rest in peace.
7:34 PM, July 10, 2008

Anonymous said…
Finally, an issue that I am passionate about. I have looked for information of this caliber for the last several hours. Your site is greatly appreciated.
7:56 AM, November 13, 2010

Anonymous said…
Finally, an issue that I am passionate about. I have looked for information of this caliber for the last several hours. Your site is greatly appreciated.
6:00 AM, November 17, 2010