By jesse parker May 19, 2009
This Thursday (5/21) I'm going to get a Synthes 3.0mm headless compression screw put into my scaphoid bone in my wrist. This option will get me out of a cast and back into my normal activities faster and also ensure proper healing of the bone. Should take around 45min surgery time. In the hospital at 12:45, out around 4. This was the option I was hoping for, fixation an reduction of broken bones is something I believe in.. and it should be considering what I do for a living. Unfortunately, these screws aren't made in my plant, I believe they are made in PA somewhere. I'll figure that out at work tomorrow. I'm going to get the long thread version in stainless. I have alot of the cancellous (spongy inside bone) on the other side of the fracture for the threads to bite into. It's going into my scaphoid, which is in the wrist and shown in the picture below (with the titanium short thread version). 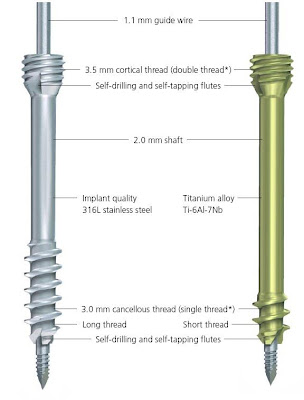 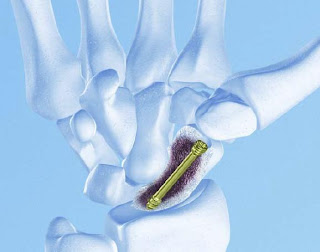 The tip of the screw has a steeper (faster) pitch than the head so as the head starts to enter the bone, it pushes the two halves together in a way that the doctor can control by how far he puts the head in. The stardrive (torx) T8 drive makes for a more definite torque transfer and reduces the chance of the driver slipping during insertion. My particular fracture isn't displaced (broken in half), so this will serve to hold it together more tightly and make it possible to just wear a splint instead of a cast while it heals. This will also reduce the chance of a non-union, which would of resulted in surgery anyways after wearing a cast over my elbow for 6 weeks. 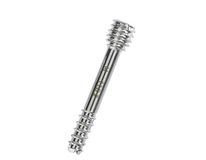 Anonymous said…
If you could e-mail me with a few suggestions on just how you made your blog look this excellent, I would be grateful.
5:17 AM, November 12, 2010