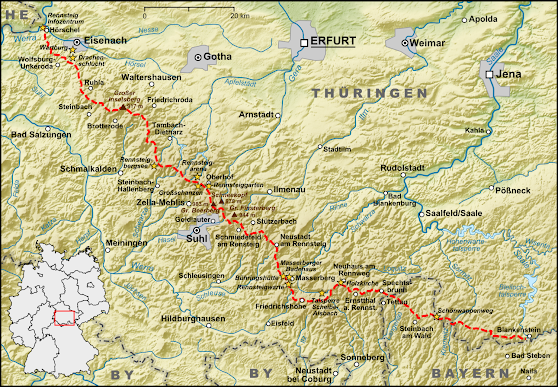 The Rennsteig is a 1169.29 km (105.19 mile)  hiking trail that dates back way into the 1300's when it was a border path between the Duchy of Bavaria and Thurnigen. The Rynnestig was first mentioned in 1330, in a border charter issued in Schmalkalden. The name itself is likely related to old high german jargon for "border".
It can also be used for bikepacking, and has a number of protection huts along the route that one can sleep at, one of the only places in Germany where this is accepted, maybe even celebrated.
I planned to go backwards from the traditional hiking direction in order to get more downhill at the end into Hoerschel, which wasn't a bad idea really. More on that later.
The trip started in Bayreuth, and with an 80ish km trip to a random forest hut I found on Komoot.

I managed to even find some pretty fun singletrack along the way! 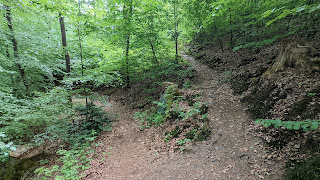 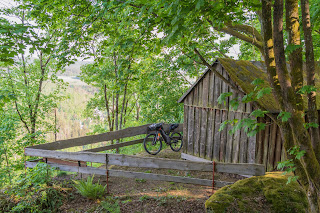 The first night was a little bit stressful, as it isn't exactly allowed to sleep in these huts (or anywhere for that matter), but the two groups I saw were friendly and happy to see someone staying there. 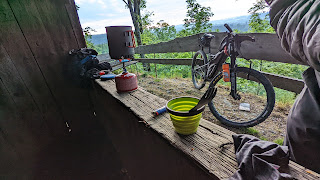 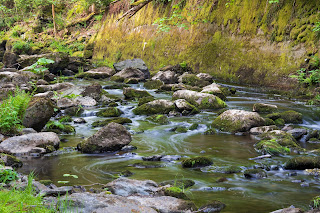 The next day was starting the Rennsteig for real, after a quick ride through Hoellental (hell valley) to the start in the town of Blankenstein. 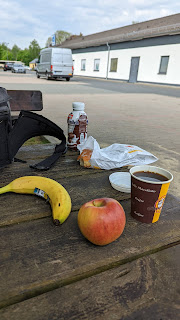 No cafes were open, so I had a grocery store breakfast to conserve what I packed and got on the road. 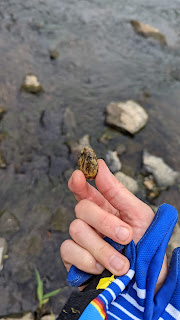 It's tradition to take a stone from one river to the other, so I grabbed one.

The first part of the ride was gently climbing up onto the ridgline of the Thuringen rante, the trail itself follows this more of less the whole way. It was paved for a while, but quickly turned to a combination of singletrack and dirt roads. Overall I'd say the route I took was half singletrack, and the other half a mix of dirt and asphalt with the vast majority being dirt. There is a special Rennsteig bike route, but I didn't follow it most of the time as it was not on singletrack. Most of what I did was the hiking route, except for those times I got lost. On that note, it's very well marked and hard to get lost with the iconic "R" that is even named Mareile after a forester's daughter. There are also over a thousand border stones, some go as far back as the 1600s.
When I finished the route, I was supposed to throw my stone into the other reiver, but it was closed so I had to go upstream and chuck it off a bridge with a  bunch of locals staring at me.. Whatever.
I looked for a place to stay without luck, and then went back up the hill to the last shelter just in time to avoid a terrible thunderstorm. Super windy with sideways rain and dust. I was dry and happy in the shelter though, proceeding to eat all of my food I had left. Which was enough. One more night. 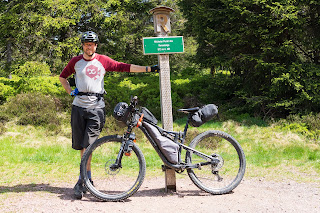 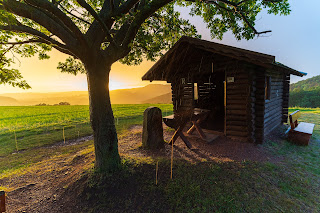