By jesse parker October 04, 2008
So I've been wanting to do this ride pretty much since I got here but the timing and my fitness has never been quite right.  Things fell together though so I went for it.

I started at 6:30 just as the sun was starting to rise.  The light kept getting better and better so I stopped and took a bunch of pictures.  The first one has a link to the album where there are many more than shown here.. 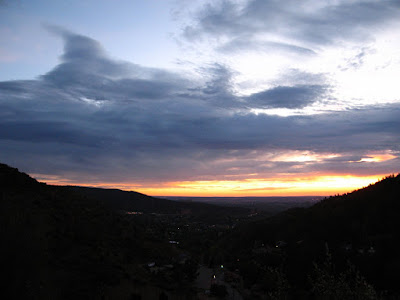 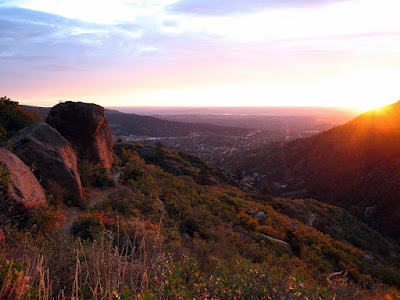 The initial climb is pretty steep and switchbacked until it reaches Barr Camp, which is a grandfathered cabin in the middle of the Forest Service that serves food, sells candy bars, and caters to overnight guests.  Pretty cool place to stay really, it's roughly half way up elevation wise too.  I stopped briefly to eat a PB and J and then moved on.  Pikes Peak started to pop up in my view here and there... Still a long ways away. 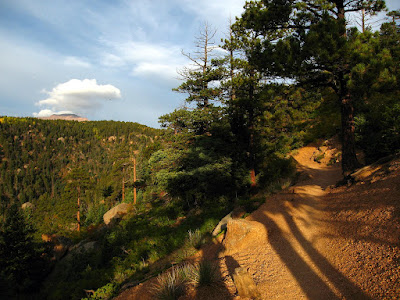 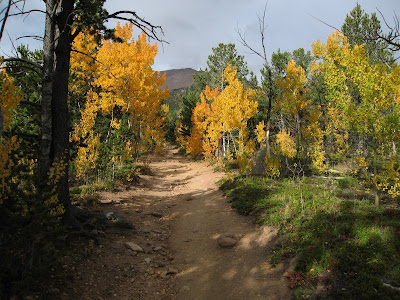 After camp the trail gets a bit rougher but remains ridable.  The aspens were in full color, so that was neat.. 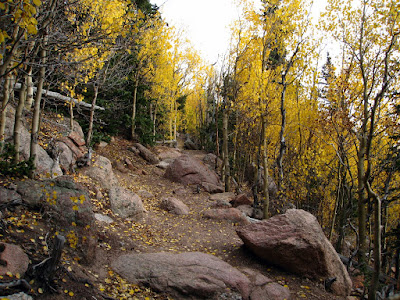 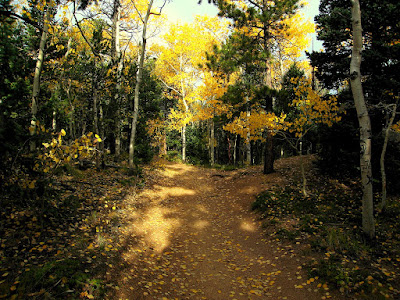 Timberline had some really cool old (bristle cone?) pines.  A bunch were all burnt and scarred from lightning... They get a lot of lightning up here.  In fact, Colorado Springs trades back and forth with Orlando (somewhere in FL) for most lightning deaths..  Great thing to think about before spending the next 3 hours above treeline. 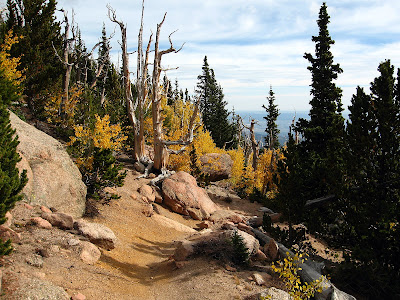 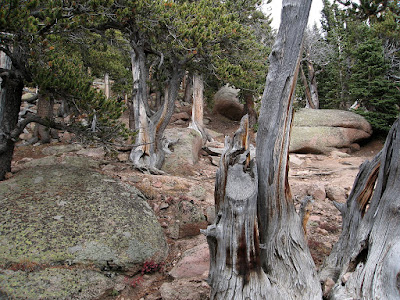 After tree line you have about 10,000 switchbacks on trail that is pretty much ridable but not exactly a lot of fun to ride (up).  I alternated with walking and riding for this point. If I were a bit more driven I could of ridden most of this, but I was just happy to be here really.  So comfort over pain prevailed.  Maybe I'm learning? 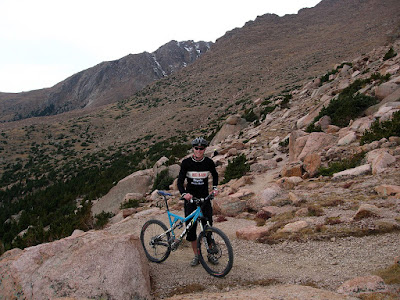 The weather was holding, so I pressed on... and on. The last 2,500 feet of climbing lasted forever. 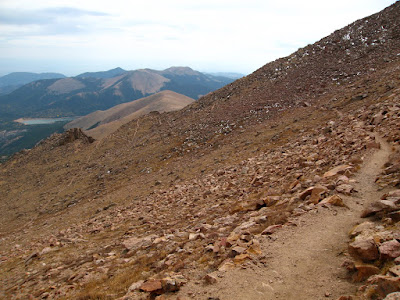 Things started to get a bit hazy here...  I felt suprisingly good though, I think it was the gummi bears..  Mmmm.. sugar. 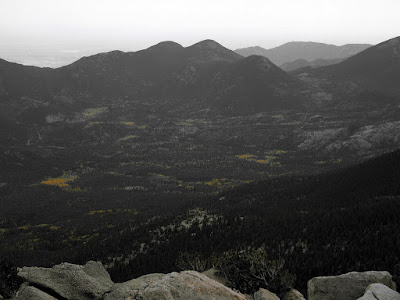 Then you get to the "16 golden stairs" which are actually 16 sets of switchbacks (32 total) and most of them are nasty and unridable.  Hardly walkable really..  I was starting to see alot of really tired people..  I would hate to be a tourist from Texas up here..  Nothing against Texas, but living at 6k probably does wonders for my tolerance of this sort of nonsense. 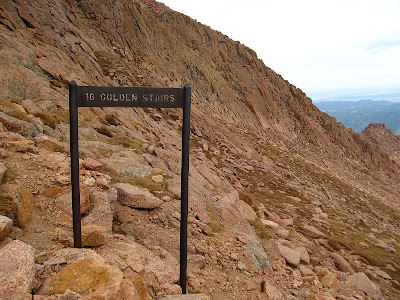 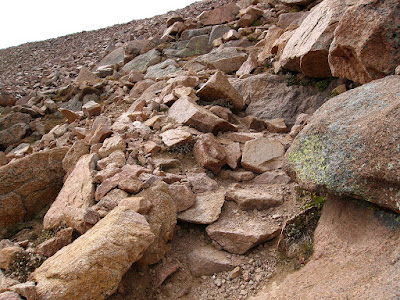 But the end is in sight now, not too far right? 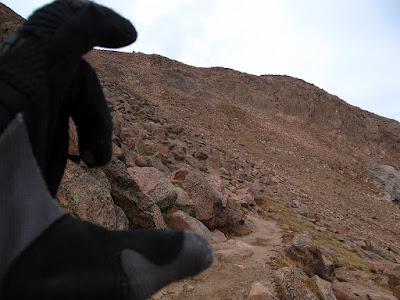 I half walked half carried my bike the rest of the way with a bit if riding thrown in mainly for posterity.  I guess a mom and her two little kids had been watching me for a while now; they greeted me with smiles and wide eyed looks.. Great, I'm a freakshow..

But that didn't matter, I made it without any real problems at all... 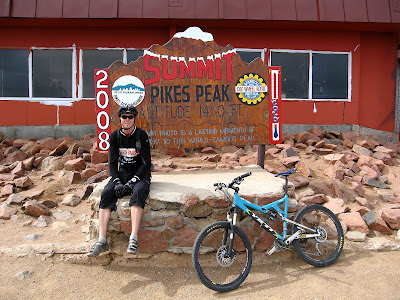 After hanging out for about 15 minutes I got my free donut (the only reason I did this) and got the hell out of there.  It was freezing cold and the the place was bcoming full of people from the train buying stuff from the gift shop and being generally loud and obnoxious. 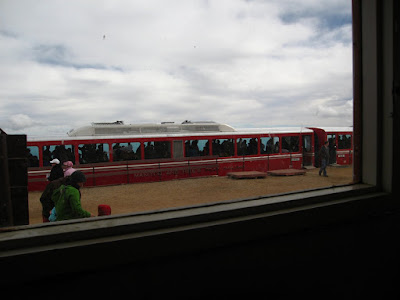 I walked parts of the first 1k of descent, but after that it was 98% ridable and pretty damn fun too.  Definitely a good payoff for what that trail did to me..

It started raining about half way down while I was hanging out at Barr camp..

The rain was welcomed at this point though, the decomposed granite trail is actually much more fun to ride with a bit of moisture in there to hold things together and make it tacky.

I flew down the last seven miles, the rain also kept the hikers down so I could maintain a pretty fast pace.  I have a feeling bikes aren't going to be allowed here much longer, I witnessed a group of bikers with full armor and big bikes blow by hikers left and right on the way up.. Those shuttling pansies are going to ruin our reputation.  Of course I shouldn't complain, everyone I met was amazingly nice, nicer than any other place I've ever ridden actually.. weird.  I got one picture on the way down.  It was too fun to stop and I was getting a bit worn out and ready for a hot shower and some dinner. 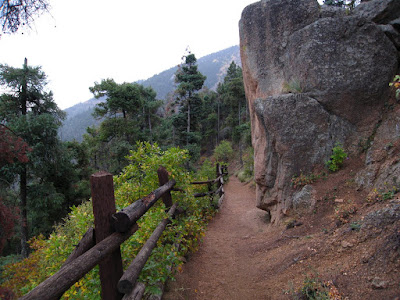 So it took me 6 1/2 hours to climb up and under three to get down.  Well worth it.  I see the damn thing every day, now I finally know just how far away it is.
bike leaf peepin' Pikes Peak S80 tired

Jay Dub said…
This looks incredible and incredibly painful... Would you care to post your statistics for the ride? You don't ride with a Garmin by any chance do you? I'd love to see the map of the ride. Elevation gained, total time, etc. I'm a data guy...

Jay Dub said…
One more question:
Do you enter location data for your pictures manually, or is your S80 location-aware (google didn't indicate that it was).

OR, have you some aftermarket trick that I need to know about? :D

Thanks. Also thanks for the write ups you do; they just serve to shore up my desire to move to where there is riding like this.
8:20 PM, October 08, 2008

Anonymous said…
Jesse - good work man! Your the second inflexible to do it :) but you were a bit slow, so what's say you try it again and this time a bit faster? kidding! That rides a bitch.. but would definitely do it again... hope all is well in the springs man!
8:12 PM, December 19, 2008